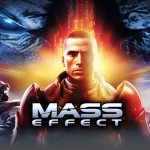 Mass Effect is set in the year 2183, and the game follows the adventures of the player’s character, Commander Shepard (named for astronaut Alan Shepard), a human Systems Alliance marine.

Players can choose whether they play as a male or female, as well as choosing the character’s background and “defining moment”.  As the player interacts with the world around him or her, choices made and neglected shape the world.  Chose to save that person?  He or she might come back to thank you later.  Decided to let that one die? Watch out for their angry spouse.

During the game, Shepard is presented with numerous side quests and assignments, but the main plot follows the character as he or she chases down a rogue covert agent named Saren, all the while discovering who that agent is truly working for: an ancient, terrifyingly powerful entity called the Reapers.  Shepard’s quest takes the player across the galaxy and to dozens of worlds, meeting tons of new species, in a well planned, narrative story that eventually pits Shepard against the immensely powerful Reaper-controlled Saren.

Throughout the game you’ll meet secondary characters, each one with a unique personality and back story that will reveal itself little by little the more you interact with them.  Later on, if you’ve become friendly enough, you may have the chance to enter into a relationship with one of them (sorry, only one – if you try for a three-way, the other two involved characters will call you out on it), culminating in a (tasteful) romantic scene, just before you begin the final mission.  It’s easy to get attached to these characters, as BioWare invested a lot of time in character development and back stories.

Gameplay is fairly standard for third-person shooters, with the added abilities to temporarily pause action so that you can survey the battlefield, as well as the ability to issue orders to one or both of your squad mates.  Each squad mate has their own powers and specialties to complement Shepard’s own abilities.  There are three basic types of abilities and powers (Combat, Tech and Biotic), each with unique traits.  Combat focuses on exactly that – being able to cause as much damage as possible with whatever weapon you happen to be holding at the time.  Tech focuses on hacking, overloading, and disabling a target’s systems.  Biotics involve the manipulation of Mass Effect fields – basically, this game’s version of the Force.  Player and squad mate classes specializes in one or more of these abilities.

The game also includes an inventory system that stockpiles acquired items until they are needed.  The inventory system is limited, so the game provides two ways to lighten the load.  Just about any vendor in the game will buy your items, giving you a modest return for any items you pick up.  Invariably, this sell price is less than the buy price of the item, so don’t expect to make some easy money just by buying an item and then selling it back to the vendor (or even another vendor).  You can also convert the item into “Omnigel”, a multi-purpose material that can be used to bypass security systems, hack locks, or disable items or defenses in-game.

Bring Down the Sky: This DLC introduces the notorious and feared batarians.  The entire DLC takes place on an asteroid, which the batarians have taken control of and is on a collision course with a human colony called Terra Nova.  Further details available on Bioware’s site: Bring Down the Sky